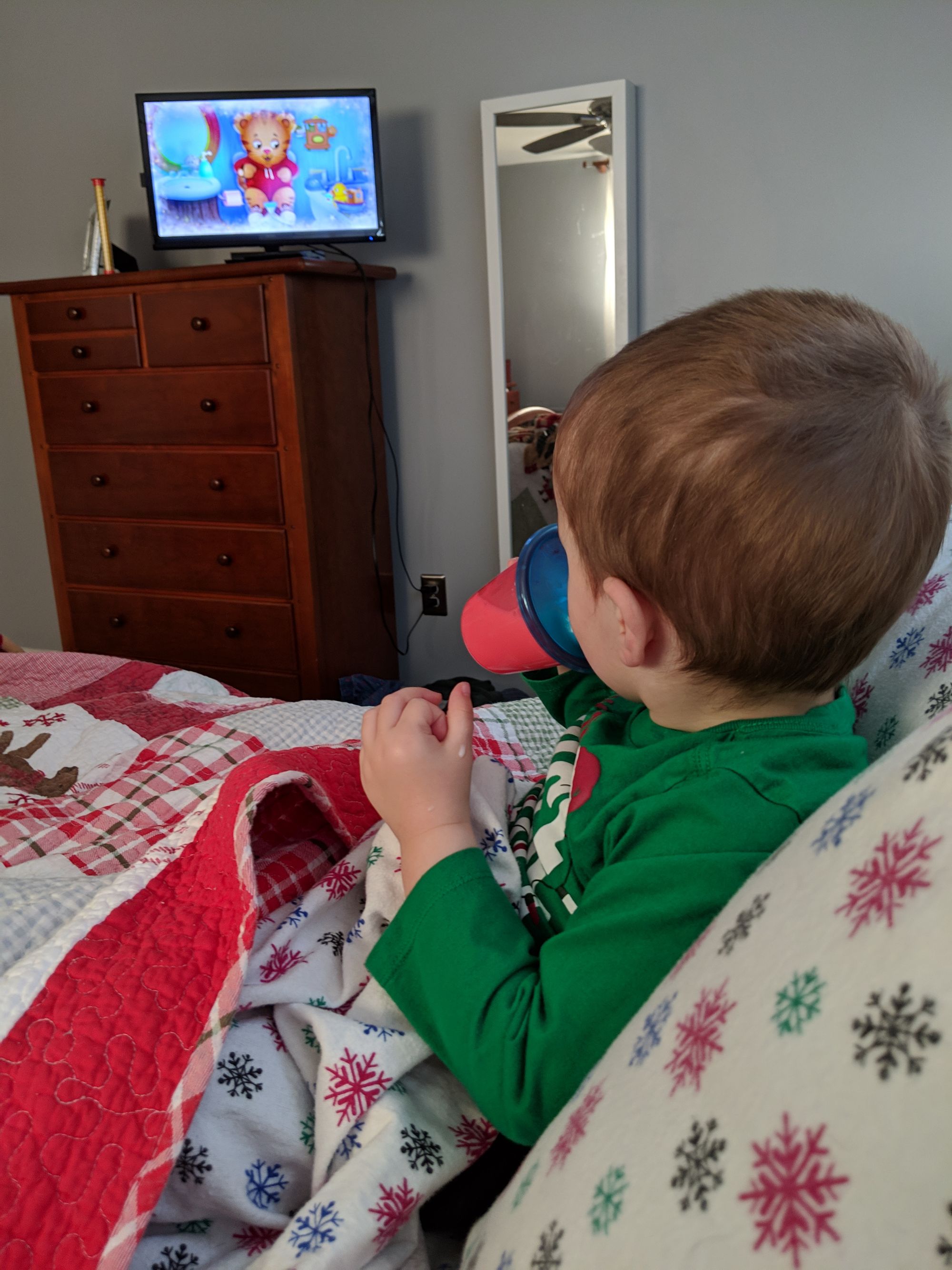 I can totally get on board with the scientific studies that prove the downsides of screen time. Heck, I notice a difference with myself when I've been using my phone a lot. And of course being a bump on a log watching TV for a while makes me feel yucky. So, of course, kids could feel the same! But the guilt and the judging has got to go.

I was talking to a fellow Mom at a playground the other day with kids who are about a year older than mine and how it can be tiring having them so close in age. And she mentioned how her working Mom friends question how she manages it as a SAHM. And she says "Sometimes we watch TV. Or a movie. And guess what? My daughter doesn't turn into a psycho from it."

On the other hand, I was reading a book and it goes in depth about screen time and how it really can affect kids moods. And for every 30 minutes of screen time, a kid should balance it out with 2 hours of free play (not structured play- free play). And how screens can make kids more agitated and less like themselves.

I think the point is, balance. And what seems like balance for one family- may not be for another.

I will never try to judge a parent for using a screen when they decide it works best for their child. I want to say, a child should be able to ride in their car around town without a movie or show on... but maybe that kid is on his or her way to a doctor appointment they are dreading and scared for and the TV show is helping distract them long enough to ride there.

Or if a Mom hands a kid her phone at a restaurant, maybe she wants to catch up with her friend who she never sees for more than 30 minutes.

Or maybe the Mom who hands their kid the iPad in the grocery store is at her breaking point and just wants to shop with a mind that doesn't constantly get disrupted and leaves her with forgetting an item on her list.

And maybe the kid that just watched TV all day was getting a lazy PJ day after months of being overbooked.

However, I also hope parents stop to think before making decisions.

Sometimes, being a parent is just going to be hard and take extra work. Man, would it be to easy to sit the kids in front of the TV to be able to get stuff done.  But then the kids would always be watching TV. And truly...who is rushing to fold laundry?

Sometimes a kid is going to be bored but it will be okay and it will force them to get creative.

Sometimes a bad mood for a kid means they need something more than a screen to lay in front of and zone....maybe they need a hug, some fresh air, or just someone to sit with them and have some pretzels and juice and talk about their day.

We all have our own rules and limits. Here are some of our rules we've established in our household:

1. If you hear a phone go off... you don't need to urgently run to it. Sometimes people can wait. (This goes for ringing, texts, other notifications. Nothing needs to be instant. If it happens to be urgent, such as an emergency and we don't get to it in time, they will call back again or leave a message. No need to live day in a day out attached to a phone because there might be a small, rare chance something bad has happened and we are being contacted.)

2. No phones in sight at meal times- whether it be just me sitting with Will as he eats breakfast, or the whole family at dinner. (I admittedly have used meal times to make video chat calls before because we are all sitting still).

3. Whatever we are doing on the phones, we announce it. For example, "I'm just texting Grammy back about plans tomorrow" or  I have to answer this call because I need to confirm my appointment" or even "I'm just wasting time scrolling through Instagram". So that we don't just vanish and escape into this virtual world that is abstract to the kids and so we realize how we are using our devices.

4. No screen time (really just TV at this point for our kids) after 5 pm unless its a designated movie night. (This gets broken on Football nights, but Will doesn't sit to watch it and volume is usually off).

5. Do not sleep next to your phone. And don't let it be the first thing you check in the morning.

Let me leave you with one of my favorite messages and YouTube videos. It shares a great point and it is something I need to watch more often to remind myself of the important message!

I saw a video on mother.ly from a perspective of a SAHM's day. And I thought it'd be so cool to document our current stage…