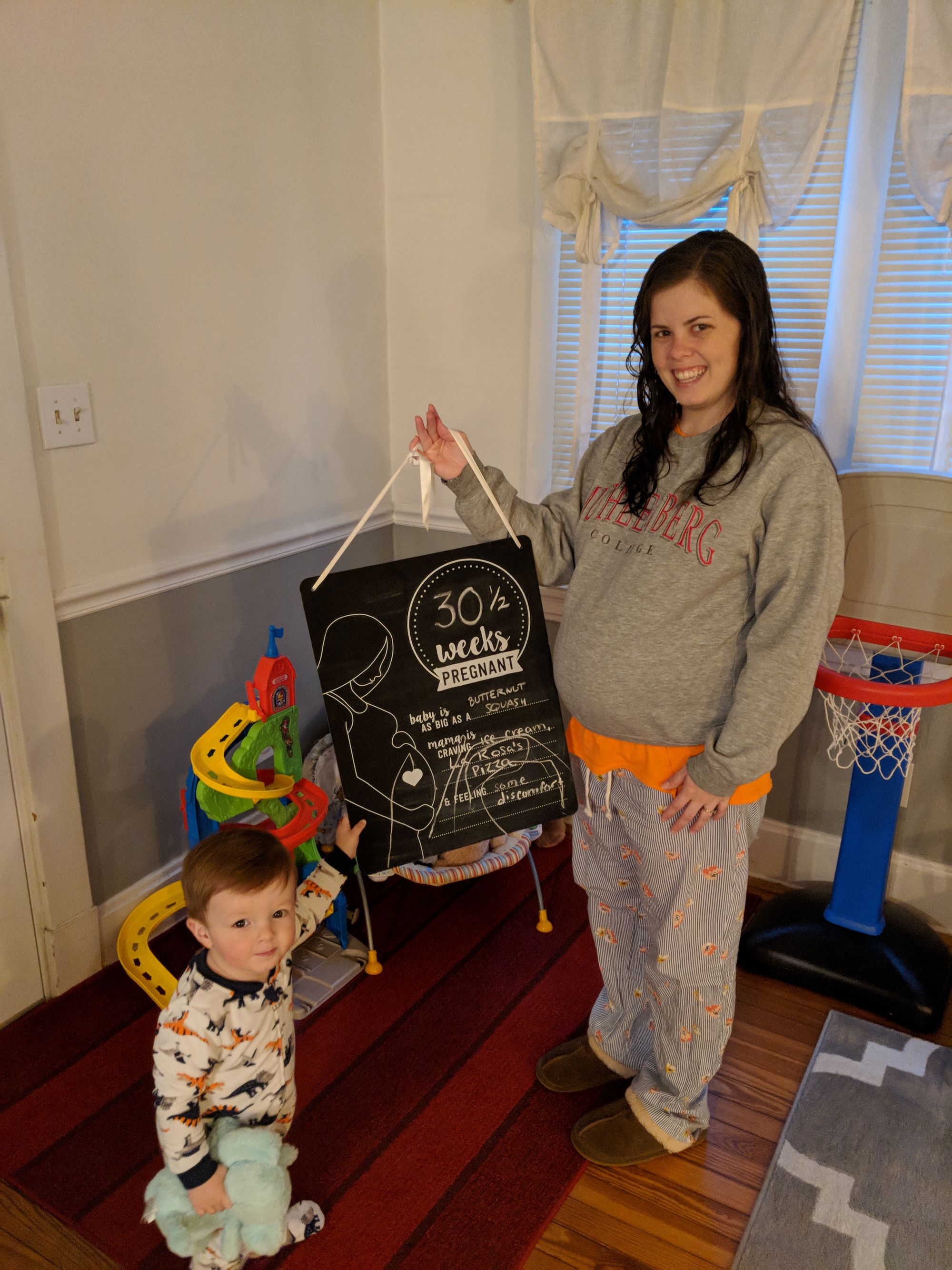 Most people shout out their significant others on birthday's, anniversaries or father's Day. Well, I want to shout out and appreciate Dan every March.

I think back to March 2016 and remember the complete life switch we got. We found out we were pregnant in January, but my "morning sickness" escalated and peaked in March and lasted all day and night for months. It was the worst I have ever felt. I remember being so blind sided by it and being completely useless and on the couch. I even quit my job (I was going to quit once baby came anyways and it was getting messy trying to figure out disability and for how long without feeling fraudulent). I couldn't walk in the kitchen, or look at my phone/computer. I was sensitive to every smell- Dan was not even allowed to sit next to me!!!

But Dan, he was a rock star. We had our family nearby and our Moms took turns coming over to help just clean the house and bring Dan some home cooked meals (I literally gagged at just stepping foot in the kitchen and if he had cooked up anything that gave off any kind of smell... well it wouldn't have been good). Of course, we made it  through that pregnancy and got the most precious little boy we could have ever hoped for!!

Then pregnancy number 2 surprised us (but I've always said this was for the best because I would have been nervous to start trying knowing what my pregnancy could be like). This time we found out at the end of September and the sickness took a different course but it was still crippling. Only this time we were living 9 hours from family with no friends or real connections yet in our new city.

This is when Dan took amazing me to a whole new level. He worked his new job all day, came home and immediately took over all of the dinner, house, dogs, and Will. He pushed through and got Will down for bed and then he'd open his computer and start to work on his company that he runs and work until 1 or 2- sometimes 3!- in the morning and go to bed to wake up and do it all again. Plus- Will was still waking in the night at this point and Dan handled that too. I was home with Will during the day and while there were some really rough days, I seriously believe my body knew it had to "survive" and make it until Dan got home.

We drove in to Philadelphia for a few weeks to have help between our families so poor Will could be fed lunch with a smiling face and no barf-bucket next to him.

I will always remember the horror of that drive.... We packed up the car with us, Will, both dogs, clothes and anything we needed for 3 weeks gone and did the drive from Cincinnati, OH to Philadelphia in one day (9 hours of driving time). Because we had the dogs, each stop required a dog let out, 2 separate adult bathroom breaks, a baby change and feed, usually some kind of food or drink for one or both of us and it was cold and raining. It was already tough with those logistics alone. But THEN Will got carsick for the first time. So we weren't really sure if it was motion sickness or if he was getting a stomach virus. And so now we have a car with a gross smell, and had an extra long stop for proper clean up. Eventually, we are about 20 minutes from my parents house. It's about 9pm at night, its raining but we are off the highway... and Will got sick again. So, we pulled into a gas station- the dogs are surprisingly the easiest dogs ever to travel with besides their size- and Dan is cleaning up a screaming baby covered in puke, in the rain and cold as fast as he can, missing a work phone call, and I'm puking in a bowl because pregnant. He was so calm and collected and took care of everything and everyone and I just remember feeling so bad that not only was I no help to him, but I was also an added stress (disclaimer: he never made me feel like a burden).

Anyways, the point of this saga is to share some tips that worked for me:

Other things I tried but not sure if they worked:

-Sea Bands
-Drinking ginger ale (Fun fact: a pharmacist told us that it only works if you drink it everyday and it is has real ginger in it.)
- Essential Oils (This actually made me get sick sometimes because the smell was too strong)
-Finding things that stay down and help settle stomachs. Some of my go-tos were: animal crackers, graham crackers, apple sauce and apple slices, Ellio's pizza, mac n cheese, sparkling apple cider, bagel with cream cheese and Nutri-grain bars.

And finally, one thing I read that is so much easier said than done.... Just expect to get sick. Stop trying to prevent it, stop thinking about it, and just be prepared. I was so anxious all the time with Liv's pregnancy trying to prevent myself from getting sick or feeling awful and mentally I couldn't let it go. The days I was able to just "give in" to sickness instead of holding it back, I was able to relax and get more relief-moments out of the day rather than feeling so tense and on edge all day.

It's so rough. I don't miss it, I didn't like being pregnant. I never had the cute glow and I was never able to exercise or drink delicious super food smoothies to fuel me and baby. But, I remember being 10 weeks along with Will, in my bathroom crying over the toilet with my Mom and she said how it's so worth it. And she was so right.

So if you are pregnant, feeling lousy, and it's not what you were picturing. I've been there. It's no fun. Do what works for you, stop comparing to other people's pregnancies, make sure you get medical help if needed and however long it may feel...it will pass.

In the meantime, you will have a whole new appreciation for people who are chronically ill, or experiencing illness from life threatening diseases verses the miracle you are building.

**Not a medical expert, not saying these are true hard facts, just sharing my knowledge of what worked for me.**